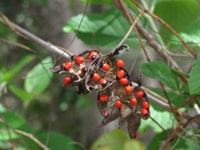 Abrus precatorius is found to be containing a very powerful poison known as abrin, which is a protein similar to the ricin. The seeds are having a beautiful bright red color with the black spot on it. The chewed seeds are when swallowed this is very deadly. Each seed is about 8mm in length & 6mm in breadth with an average weight of 105mg. These seeds were used by the Indian goldsmiths for the purpose of weighing gold and silver.

The Actions of the Seeds are:

The plant is commonly known as Ratti or Gunchi within India. The ratti referred to a single ratti seed. This seed was the standard weight in the ancient Indian system of measurements, because the seed is fairly constant in weight; on average it weighs about 105 mg. The seeds are about 100 times less poisonous when taken by mouth than when injected.

Other Names of Abrus Precatorius

Abrus precatorius is an organic irritant poison. All the parts of the plant are poisonous. Seeds contain a variety of poisonous proteins, among which the most important one is abrin, a thermo labile toxalbumin, which is very similar to viperine snake venom in their physiological and toxic properties. In addition to abrin the seeds contain a fat-splitting enzyme, haemagglutinine within the cotyledons.

Abrin, the most important active principle of Abrus precatorius seed is a tasteless, amorphous, pale grey colored solid substance. This dissolves readily in cold water, and the solution which is of slight yellowish in color froths on agitation. Abrin is also soluble in glycerin. When taken internally by mouth, the gastric juice has some inactivating action on it. Abrin loses its activity on boiling, and therefore the seeds when cooked can be taken without any harmful effects. It is said that the powdered seeds in 60-200mg doses boiled with milk are used as a nervine tonic.

Symptoms may be delayed from a few hours to 2-3 days. If uncooked seeds are taken, the following signs and symptoms develop. They include abdominal pain, nausea, vomiting, diarrhea, weakness, sunken eyes, cold perspiration, trembling of the hands, dyspnea, weak, rapid and irregular pulse, vertigo, and faintness, rectal bleeding, oliguria and features of uremia. If injected subcutaneously in man, at the site of injection painful swelling and ecchymosis develops with the inflammation and necrosis, generalized septicemia and hemolysis occurs. There may develop convulsions and death may occur from cardiac failure (cardiac paralysis) within 3-5 days.