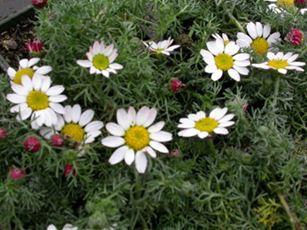 The English name of Anacyclus pyrethrum (Akarkara) is Pellitory and Akarkara is an Indian name of this plant. It is a perennial herb that is much like chamomile in habitat and appearance and hence also known as Spanish chamomile. This plant belongs to the Asteraceae family.

This perennial plant has numerous stems with downy branches. It is a procumbent herb that resembles chamomile to a greater extent. The stems of this plant lie on the ground for part of their length, before rising erect. Each of the stem bears one large terminal flower with yellow colored disk, white colored rays and tinged with purple beneath. The leaves of this plant are alternate, smooth and pinnate. They are pale green in color with deeply cut segments. The root is somewhat cylindrical in shape and is slightly twisted. The roots are often crowned with a tuft of grey hairs. They are of brown color with bright black colored spots on it. The flowering period of this plant is from April to June.

The roots and flower heads are used mainly.

This plant has been used for centuries, in Ayurveda, for various health purposes. This plant is also used as a food spice.

The roots of this plant contain three fatty acids in it. The chemical analysis shows that they also contain one sterol and ten unsaturated amides. The amides include enetriyne alcohol, pellitorine, inulin, anacycline, phenylethylamide, trans- 4-dienamides, polyacetylenic amides I-IV, and sesamin. Tannins, essential volatile oil and gum are other constituents present in the root of this plant. Pyrethrine, an alkaloid, is one of the active principles. 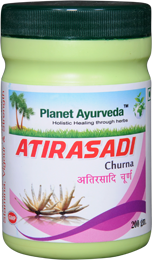 Planet Ayurveda's Atirasadi churna is prepared from the combination of various herbs. Anacyclus pyrethrum (Akarkara) is one of an ingredient in it. This powder supports the healthy male reproductive system. This product is also good for maintaining healthy blood pressure and healthy glucose level as well.