Concept of Asthi in Ayurveda 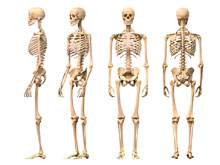 In the Ayurvedic system of medicine, asthi is referred to as bone. Bone gives the solid appearance to the human body. Saptdhatu (Seven-tissue theory) is very fundamental to Ayurvedic system of medicine. From the Anatomy point of view, dhatu refers to tissue. The seven tissues or more precisely, dhatus are important from an anatomical point of view. They are rasa, rakta, mamsa, medas, asthi, majja and shukra. From a human anatomy point of view, they are better described as plasma, blood, muscle, fat or adipose tissue, bone, bone-marrow and seminal fluid.

According to the Ayurvedic system of medicine, the seven tissues are chiefly responsible for the immunity. Ayurvedic system of medicine follows a very rational and specific method of treatment for diseases having relation to the particular tissue. The growth and existence of the human body are dependent on these seven tissues. These seven tissues are composed of five elements or panchmahabhuta. When there is an imbalance or disequilibrium in the functioning of the tissue, the result is the manifestation of the disease.

All the seven element tissues of the body contain their own Agni to metabolize the nutrients supplied to them through the channels of circulation.

When the Food We Eat is Digested and is Converted into Three Portions:

When the medadhatu undergoes a refining, then it is known as asthidhatu. The Asthidhatu is mainly concerned with the basic structure to the human body. Asthidhatu include all the cartilaginous components in the human body. The micronutrients and macronutrients in medhadhatu are meant to give nourishment to the asthidhatu, undergoes processing in asthivaha sroha (channels of circulation in bony tissue) by dhatwagni (tissue fire connected with bone). Dhatvagni and bhutagni (the fire connected with five basic elements or proto-elements) bring about heaviness and hardness to ground-substance which constitutes the bone.

As far as the physical body is concerned, asthidhatu is formed in an unstable form as medadhatu flows into the purishadharakala (membrane bounding the rectal canal and anus) and is digested by the asthiagni (tissue fire connected with bone). In addition to bone-formation, the subsidiary or secondary tissue (updhatu in Ayurvedic anatomy) of bone i.e. teeth are formed. The malas (defined as waste products in Ayurveda) of this metabolic pathway are the hairs and the nails.

Functions of Asthi According to Ayurvedic System of Medicine

When the Bone Mass or Nutrition of Bone is Increased, the Following Diseases may occur:

When the bone mass or nutrition of bone is reduced, the following diseases may occur:

Asthikshaya (decrease in bone tissue) has been explained in Ayurvedic system of medicine under ashtadasha kshayas (18 deficiencies). In Asthikshaya, there is decrease of asthidhatu (bony-tissue) content. Similar to Asthikshaya, there is a diseased-condition called as osteoporosis, has been described in Allopathic system of medicine. Brittle bones result decrease in the bone tissue and increased risk of fractures (known as pathological fractures). According to the concept of Aashrayaashrayee bhava, bone is the seat of the biological air...vata dosha. There is an inversely proportional relationship between bone and vata regarding decrease and increase. If there is an increase of vata, there is decrease of bone.