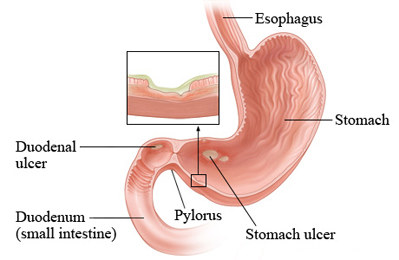 In ancient times, as the facilities did not exist to detect the exact location and presentation pattern of structural-functional diseases caused by excess acid secretion, the acid-peptic conditions were described under the heading Amlapitta (hyperacidity or chronic functional dyspepsia) and the conditions where abdominal pain is predominant are termed as Shula (abdominal colic). Annadrava Shula (Gastric ulcer) and Parinama Shula (Duodenal Ulcer) are included in peptic ulcer. As regard, etymological derivation of shula is concerned; it is formed by the combination of Shula Rujayam (Dhatu) + K (Pratyaya).  Generally, the term shula is reserved for a type of pain like karna shula (otalgia), shirashula (headache) and akshi shula (Pain in the eyes). Shula normally appears as rupa (symptom) or updrava (complication) of a disease. Duodenal ulcer develops in the duodenum (the upper portion of the small intestine). Duodenal ulcer is among the commonest ulcers.

Later on, Madhava Described as:-

In all above described types of sula, vata, the biological air, is the predominating humour.

1. Vataparinamashula: Chief features of vataparinamashula are abdominal-distension, obstruction in movement of waste products, gurgling sound in the intestine, anxiety and a reduction in the pain incidence by consumption of warm and fatty foods.

3. Kaphaparinamashula: Chief features of kaphaparinamashula are vomiting, nausea, delusion, pain of dull character, but long in time and reduced by bitter and pungent food items.

Sannipata type of parinamashula which is associated with loss of power, emaciation and poor digestion is difficult to cure.

Amlapitta (hyperacidity) is a disorder caused due to vitiation of the biological fire... pitta. At the intial stage, physical attributes of pitta, fluidity and sourness results in Vidagdhajirna (dyspepsia resulting from aggravation of pitta). Later on, there is  inflammation and ulceration in the sleshmadhara kala (mucus membrane) of the duodenum (first part of the small intestine). In modern medicine, parinamashulais correlated with duodenal ulcer. A duodenal ulcer is caused by an infection with a bacterium called Helicobacter pylori.

Bleeding ulceration and perforation are major complications of parinamashula.

In case of parinamashula, the physician is required to undertake detailed case. Prescribing the acid-neutralizing and demulcent (healing) herbs are the mainstay of the treatment. The physician gives major instructions with regard to improvement of dietary-habits; intake of junk food, reduction consumption of alcohol, avoiding stress and depression and timely bed rise and sleep, and above all, avoidance of tensions and worries.

In order to know the treatment of parinamashula, it is vital to first know what the major cause. As vata aggravating foods is the root cause of parinamashula, Ayurveda recommends medicinal herbs for pacifying vata.

Planet Ayurveda's Vara (Triphala Churana) is the best remedy for cleansing action. One teaspoonful (5 g) of the formulation is best taken while going to bed with milk milk or water. Planet Ayurveda's Triphala capsules have been designed for people not interested in taking powder.

Planet Ayurveda's Agnitundi Vati, one tablet thrice a day, after meals, is ideal for igniting the digestive fire and reducing gaseous distension of the abdomen.

Parinama shula is a serious clinical disease. Taking Planet Ayurveda's medicines alongwith diet-restriction and maintaining the function of vata, the biological air, is the mainstay of the treatment.