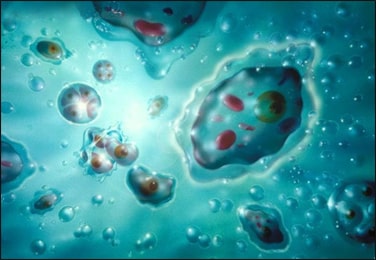 Pravahika, as described in the Ayurvedic texts, can be compared with the dysentery. Pravahika is caused by the infection of Entamoeba histolytica, a Protozoan. Pravahika is diagnosed by the symptoms of diarrhoea with blood and mucus, flatulence, abdominal cramps and pyrexia. Laboratory investigations included the stool examination for the presence of amoebic cysts.

When Vata, the biological air aggravates and associates with Kapha, the biological water, produces the disease called "Pravahika". Pravahika is vyadhi of Annavaha Srotas (Channels of circulation dealing with food) and Pureeshvaha Srotas (Channels of circulation dealing with feces). Agnimandya (indigestion) is the root cause of Pravahika.

Kapha adheres to the walls of pakwashaya (Large intestine) internally. Because of that Vata (the biological air) requires more force to expel kapha (the biological air) out. The patient develops Pravahan i.e. forceful defecation or tenesmus. Thus, by more and more Pravahan, there is repeated defecation containing kapha. This process is called as Pravahika. It is characterized by defaecation of stools with small quantity of shleshma (Mucus) and rakta (if pitta is involved) frequently accompanied with tenesmus.

Vaghbhata says Agnimandya (indigestion) is the major culprit behind all the diseases. Hence, in Pravahika, Agnimandya is vital factor as far as pathogensis is concerned. Agnimandya is produced by dravaguni kledak kapha (lubricating biological water). Agnimandya further effects prakruta saman vayu (variety of vata in the digestive system), because samana vayu and agni are closely allied to each other, hence function of samana vayu is also hampered, it results in impaired digestion. Agnimandya produce Ama, due to Ama, srotorodha (obstruction in the channels of circulation) is produced, this cycle continues. Aggravated vata tries to expel out the accumulated kapha from the large intestine. Due to disturbance in the properties of accumulated kapha, there is increased urge for stool passing. This type of stool passing is abnormal as compared to natural stool passing. Such abnormal stool passing denotes an impaired function of Apana Vayu.

According to the Ayurveda, Pravahika is Characterized by:-

According to Ayurveda Pravahika is known as atisara (Diarrhoea) usually kapha gets aggravated in stomach & intestines. Along with kapha vata pulls down the accumulated kapha & eliminate stool with mucus. Planet Ayurveda offers best quality herbs and herbal remedies for ayurvedic treatment of Amoebiasis (Amoebic dysentery).

Dietary restriction has its own importance in treating pravahika. Buttermilk is the mainstay of the treatment. Salt, spice and water should be avoided.

Pravahika is the outcome of ama accumulation it the gut. In treating Pravahika from Ayurvedic point of view, neutralizing the toxins in the intestine is the mainstay of the treatment.