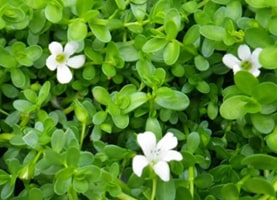 Ayurveda is the gift of India to the world. It brings with it the rich inherited properties of its herbs, minerals, and resins. Ayurveda introduced the world to the curative actions of Yoga. The western world recognizes India for its herbs and Yoga. Ayurveda is the art and science of using herbs, minerals, and naturally produced substances to bring balance to body and mind by inculcating a balanced diet and healthy lifestyle. Brahmi (Bacopa monnieri) is a long used plant in diet by ancient Ayurvedic practitioners for a healthy and strong body.

It is a creepy herb that grows in branches, is small with thick leaves that grow opposite to each other on the stem. Usually found in marshes, Brahmi can grow in wetlands, shallow water, and muddy zones. It does not require much sun to grow being an aquatic plant.

The botanical name of Brahmi is Bacopa monnieri.

The herb is derived from the family of Plantaginaceae although it can also be placed under the families Scrophulariaceae, Gratiolaceae, or Veronicaceae also.(2, 4)

Whole Plant is used in the production of capsules.

Brahmi is derived from the Sanskrit language. It is a derivative of "BRAHMAN" the name of "LORD BRAHMA". According to Hindu mythology, Lord Brahma is the creator. He creates energy, forces, and life. Brahma stands for universal consciousness.((1, 2, 3)

It is also known as Saraswati for the Goddess of learning, wisdom and Somavati that stands for full of nectar. All these derivatives and quotes tell us about the inherent powers of this herb derived from the BRAHMI plant.

Brahmi is found throughout the Indian sub-continent. The plant is a creeper grows in the marshy zones of India, Pakistan, Sri Lanka, Nepal, China, Taiwan, and the USA. The Hawaiian island, and the state of Florida are rich in Brahmi plants.(4)

The plant of Brahmi has been used since ancient time as brain tonic and memory power enhancer. They believed that Brahmi has highly beneficial effects on the Brain. It was also used for its stress relieving effects. The Vedas have references of Brahmi as used by the ancient physicians in numerous health conditions. Although, scientific benefits of Brahmi are still under research but we at Planet Ayurveda recommend its use as a dietary supplement only. It can only act as a supplement and should not be taken in place of proper medical treatment.

A few salient features noticed and recorded over years for Brahmi benefits are:

Brahmi has been used since ages for its actions on the brain cells. Ancient Ayurveda believe that Brahmi has health benefits on the brain cell. In recent studies and research, Bacosides- an active compound in Brahmi showed therapeutic influence on the degrading cells of brain in Alzheimer's disease. The research also showed that Brahmi can also influence regeneration of brain cells in a positive manner. (8, 9)

Brahmi is a very good supplement in diet for the healthy functioning of liver. Its alkaloid help to detoxify liver and enhance its life.

Hypoglycemia in Infants and neonates

In case of neonates, hypoglycemia can lead to serious brain damage. Glucose is very important for brain functioning. In neonates, low blood glucose can lead to damage of brain functions and cognitive functions. Bacosides can protect the neurons in brain impairment. Researchers are currently studying the effects of Bacosides on damaged brain neurons. (10)

Brahmi has been in used since several years for irritation, induced redness and swelling. It is believed that Brahmi has anti-allergic properties. Researches have been going on to understand the effects of Brahmi on the boy's autoimmune response. (11)

The first isolated alkaloid from Brahmi was 'Brahmine'.(12) Brahmi has been researchers' favorite over the last few decades. Different researches on its chemical constitution, its therapeutic powers, and its pharmacologic effects have been carried out. Two important alkaloids of Brahmi are Saponins and sterols.(13) There have been special investigations of bacosides A and B. These have nootropic action (Medhya Rasayana). (14)

Brahmi possesses some anti-cancer activity. This is a research under study at present and some conclusions have been drawn by studying the effects on rats. These studies show that Brahmi increases the anti- oxidant count and reduces the markers of tumor progression in fibro sarcoma.(3) Also, studies prove that if Bacoside-A is given as a preventive, it prevents surge of lipid peroxidase activity of the serum marker enzymes and therefore maintains the antioxidants. The effect of this is the prevention of Diethyl nitrosamine-induced hepatocellular carcinoma. (3)

There are some studies on animals to demonstrate the effects of Brahmi on Broncho-constrictive and allergies. The results show that it acts as a relaxant on chemically-induced bronchoconstriction. The studies done in vitro on pigs and rabbits show a vasodilator effect on the aortas and pulmonary arteries. This could be calcium chloride-induced contraction in these tissue. (12)

Ayurvedic Products of Planet Ayurveda that Make Use of Bacopa Monnieri

At Planet Ayurveda we strive to bring to you anything but the best. Our Brahmi capsules are a 100% natural, high-quality extract of potent Brahmi plant. It is procured from the best available trees under completely hygienic conditions. We process the manufacturing of our capsules in closed germ-free environment and package them into capsules. The processing and packaging of the Brahmi capsules is done with minimal human intervention.

The capsules of Brahmi are prepared from natural 100% pure Brahmi (Bacopa monnieri). There are no fillers added to the capsule. We use no animal products in these capsules and they are completely vegetarian.

We at plant Ayurveda try to raise the standards of quality by raising the bar of quality a notch above the others in the market offering similar products. We strive to bring to our loyal customers the best products formed under extremely hygienic conditions. We do not use chemicals, fillers, yeast, starch, or any kind of preservatives in our formulations.

How Can I Use Brahmi Daily?

The capsules prepared at Planet Ayurveda are completely natural and vegetarian products. They contain no wheat, dairy, or other food supplements. Brahmi capsules can be consumed with warm water. The capsule should be consumed as a whole and breaking it is not recommended. We recommend 2 capsules daily for adults and 1 capsule a day for children.

Brahmi has no side effects on the body owing to its natural occurrence and safe preparation in our laboratories. Its regular usage for long period is considered safe. No withdrawal or habit forming symptoms have ever been reported.

Caution: Although, Brahmi has no known side effects, pregnant females and lactating mothers should consume it only under medical supervision.

How long will a Single Bottle of Brahmi Capsules Last?

There are 60 vegetarian natural capsules per bottle of Brahmi. It is advised to consume 1-2 capsules per day. Based on personal body requirements and dosage a bottle should last anywhere from 15 to 30 days. Regular intake is recommended for best results.

Pregnant or lactating women and any one under a physician's care for any health condition should consult with their physician before using any dietary supplements. This information is in no means complete, final, or proceeding towards any medical studies. It is for general educational purposes only and should not be substitutes for a medical consultation.