What are the Uses and Health Benefits of Club Moss (Lycopodiopsida)? 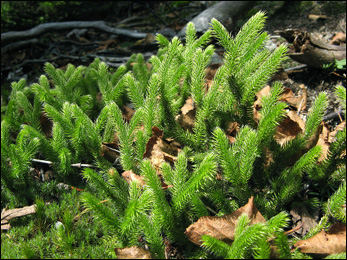 What is Club Moss?

Club Moss is the most widespread species of the Club Moss group. It is also the most studied species. These plants are evergreen herbs with needle-like leaves.

What is the Botanical Name of Club Moss?

What are the other Names used for Club Moss?

How can be Club Moss Scientifically Classified?

It is a vascular spore-bearing evergreen plant which grows up to 1m long. Stems are branched and closed densely with spirally arranged small leaves. Leaves are 3-5 mm in length and up to 1mm wide and are modified sporophylls which enclose spore capsule. Leaves are yellowish green in color and are also called mesophylls. Its stems produce roots at frequent intervals. Its roots are thin adventitious and dichotomously branched. Spores are homosporous, light yellow colored, unicellular, filled with oil and fats. Spores germinate in about 3-8 years.

Where is Club Moss Distributed?

It is spread across several continents. It is found commonly in Europe, Asia, and North America. This plant is usually found in the temperate regions like moist shaded woodlands, rocky sleep and mixed woods. But due to regular burning in farmed areas and sites, this species is endangered in many of the places.

What are the Chemical Constituents of Club Moss?

The chemical constituents of this plant include alkaloids (1-0.2%) which include eine, Flavonoids, Polyphenols and Triterpenoids.

Which parts of the Club Moss used for the Medicinal Purpose?

What are the Medicinal uses of Club Moss?

What can be the Side-Effects of Club Moss?