Diabetes mellitus, commonly known as diabetes, is a lifelong disease which occurs due to high blood glucose level in the body. Diabetes can cause various other serious complications. It can damage our eyes, kidneys, and nerves as well.

Pre diabetes is one of a condition of diabetes in which blood sugar level is higher than the normal, but not as high to be called diabetes. If a person is suffering from pre diabetes, then he is at higher risk of developing type 2 diabetes.

There are three types of diabetes:

Diabetes mellitus is known as "Madhumeha" in Ayurveda. There are twenty different types of diabetes, in Ayurveda. It occurs due to the aggravation of all the three doshas but mostly due to kapha dosha. 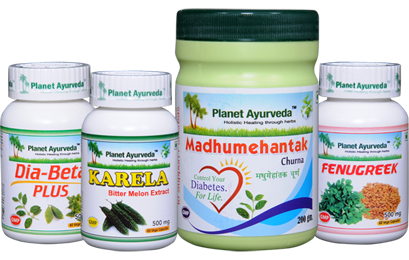 The Fenugreek capsules from the house of Planet Ayurveda are prepared by using standardized extract of fenugreek (Trigonella foenum graecum). Fenugreek plant is a good source of lecithin, choline, phosphates, trigonelline, trimethylamine and iron.

Planet Ayurveda's bittermelon capsules contain pure extract of Bittermelon (Momordica charantia) in it. Bittermelon, also known as karela, is an excellent source of vitamin A and C.

Dosage - 2 capsules, two times a day, with plain water, half an hour before meals.

Planet Ayurveda offers only 100 percent pure and vegetarian products that are prepared using the pure herbs in it and no chemicals, preservatives and additives are added. They are safe to use and can be taken as dietary supplements to maintain a healthy body. All the products are free from side effects.