What are the Therapeutic Uses and Health Benefits of Giant Kelp (Macrocystis pyrifera)? 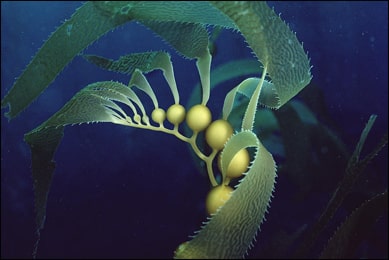 What is Giant Kelp?

Giant kelp is the largest "seaweed" and it is also known as giant bladder kelp. As it resembles a tall grass but it is not a plant. It is rich in potassium, iodine, and other minerals. This is a brown alga which is part of the large kingdom of life called as Proti. These proti are mostly single-celled organisms. It is harvested for use in aquaculture also used in the production of several foods and cosmetic products like toothpaste, ice cream, cereals etc. Its botanical name is Macrocystis pyrifera and it belongs to family Laminariaceae.

Giant kelp mostly grows in turbulent water, grown up to 60 cm (2 feet). As kelp reaches the sea surface, then it continued to grow horizontally. Each leaf includes a gas-filled pod that floats in order to remain upright. Its leaf is like a blade, the stem is like astipe.

It is native to central and southern California, South America, Tasmania, New Zealand, and Sub-Antarctic islands.

What are the Medicinal Uses of Giant Kelp?

What are the Therapeutic Uses of Giant Kelp?

Giant kelp is rich in iodine, which normalizes the T3, T4 and TSH levels. This herb balances the hormones and maintains the functioning of the thyroid gland. It also provides relief from other symptoms such as fatigue, weakness, brittle hair, depression etc.

Obesity is a disorder that involves excessive fat in the body which increases the risk of health problems such as pain in the joints or back region. This herb improves cardiovascular health and reduces the risk of complications. It also maintains the physical functioning of the body and provides relief from pain by its pain relieving property.

Giant kelp is used as an antioxidant that is helpful in treating infected ulcers. This herb promotes the wound healing process by inhibiting the functions of the enzyme collagenase.

This herb acts as a detox supplement that detoxifies the blood and removes toxins from the body. It stimulates the production of blood cells in the body and provides relief in blood disorders such as Aplastic anemia, pernicious anemia, thalassemia etc.

Giant kelp acts as a bronchodilator that dilates the bronchioles and widens the airways for proper inspiration and expiration process. This herb acts as a cough suppressant that reduces the cough reflex and decreases the production of mucus. It provides relief from other symptoms such as chest pain and congestion, breathing discomfort, headache etc.

In kidney disorders, this herb maintains the proper functioning of kidneys by reducing the levels of urea, creatinine and uric acid levels in the body. This herb acts as a diuretic that increases the production of urine in the kidneys to get rid of excess salt and water.

Giant kelp increases the appetite and promotes the digestion process. This herb neutralizes the acidic content and kills the growth of microbes in the stomach. It also maintains the bowel movements and provides relief from symptoms such as pain and stiffness in the abdomen, acidity, bloating etc.

In arthritis, this herb acts as an anti-inflammatory as well as an analgesic that reduce the pain as well as inflammation. It also promotes the functioning of joints and prevents the friction between joints. It keeps the joints healthy.

Different Preparations made by Giant Kelp

Doses of these Preparations