Gout is a metabolic disease, and is often seen along with obesity, diabetes, and high blood pressure. Uric acid is a result of the breakdown of protein molecules called purines that produces mono-sodium urate crystals that accumulate on the ligaments and cartilage of joints, on tendons, and in the tissues around.

Purine break down results in lactic acid, and lactic acid competes with uric acid for excretion. Uric acid crystals can build up under the skin causing inflammation and swelling.

Purines can be generated by the body during normal breakdown of cells in cellular turnover. Purines and an over production of uric acid can also be a result of the over consumption of purine rich foods such as anchovies, sardines, liver, beef kidneys, brains, herring, mackerel, scallops, and game meats. Gout is associated with the over-consumption of protein rich foods, red meat, and alcohol.

The kidneys are responsible for approximately one-third of uric acid excretion and it is important to avoid becoming dehydrated with gout; the rest of uric acid is normally broken down in the blood or the gut. When uric acid levels in the blood are high, it is called hyper-uricemia. Not everyone who develops hyperuricemia will develop gout, but it becomes more likely.

Gout appears to be more prevalent in males ages 40-50. Now a days it is becoming more common in the age group 35-45. There is a strong familial relationship with gout, and genetic dispositions to gout can include kidney abnormalities and the inability to produce enzymes that allow for the proper break down of uric acid.

The ancient healthcare system of India utilizes knowledge of herbs to reduce high levels of uric acid in the blood naturally. There are many effective herbs which neutralize acidic medium, relieve the pain and inflammation and help to get rid of gout.

Gout is a painful arthritis caused by accumulation of an acidic compound called Uric acid. The first signs start from the bigger toe but it can also involve ankles, elbows, knee joint, smaller joints in hand and feet. Uric acid is eliminated by the kidneys Navkarshik churna is an ancient herbal formulation explained in the ancient Ayurvedic text -Chakradutt Samhita ( 1100 A.D.) There are 9 herbs which make this blend and all the herbs work together to reduce elevated uric acid levels and clean the blood, without causing any side effects. The herbs also help to reduce the pain and swelling and provide instant gout relief within 2-3 days of using this powder.

In Ayurveda, Gout is explained as Vaat-Rakta ( Vata is air and Rakta is blood). It means the imbalance of Air element and accumulation of toxins in the blood. The uric acid is accumulated in the blood leading to painful joints and swelling. The Chinese medicine also sees the wind energy as the culprit and toxins in the blood.

Faulty lifestyle, irregular eating and drinking habits, too much protein intake, stress and anxiety are the major reasons for faulty protein metabolism leading to high levels of uric acid.

In 75 % of the cases, the big toe joint is attacked first by the gout. Early attacks are short lived, however as the level of uric acid goes high, the painful attacks are longer and become more frequent.

The uric acid crystals later start to irritate ankles, heels, knees, writs and elbows. Sometimes the gout can appear suddenly as well. The pain is really stinging as if some scorpion has stung the area.

There are many natural herbs for high uric acid like Giloy, Manjistha, Triphala (all of them are in Navkarshik Churna), Kishore Guggul tablets also help to reduce the pain and swelling. Punarnava capsules helps to reduce the swelling and inflammation. 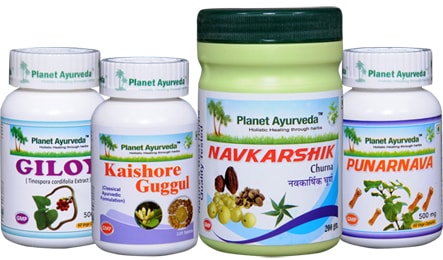