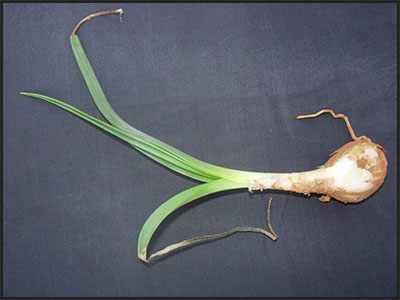 A perennial herb, white Squill is a native from the Mediterranean region. Mostly it grows on the sandy land that is close to the sea but has a warm climate. It is a small plant that grows to a height of 2.5 feet. Its flowers sprout out before the leaves. Its appearance is like an onion, that's why it is also called sea onion or sea squill. Its bulging base and dried inner scales are harvested and the rest of the parts are thrown away. Its outer scales are sliced and dried. The bulb gets harvested only after flowers sprout out and ripen. Indian squill has dried slices of the bulb called Urginea indica Kunth. It comes from the family of Liliaceae. It can be found to grow all over India including Saurastra and Konkan. It's bitter and acrid in taste.

Its therapeutic benefits and how to use it differently in different diseases are mentioned an all standard Ayurvedic medicinal plant books. White squill is degraded by Indian squill, which has similar biological benefits. Red squill is used when the case is regarding rodenticide. Squill glycosides have cardiotonic features, just like digitalis, but are a little less potent.

When a study was conducted to know any effects of Indian squill on various diseases, it was found to be satisfactory, enhancing spirometry parameters in asthma, when its supplements are given for 6 weeks.

If its use is prolonged it might develop vomiting after causing irritation in the gastric area. Vomiting may pave the way for secretions outflow to increase their pace.

Generally, red squill is never used medicinally. Scilliroside's convulsant action can prove to be fatal, and not by direct cardio toxicity. Tests were conducted on rats, as they lack vomiting reflex and are not sensitive to any action done by these glycosides. All other animals vomit squill laced thing before consuming and show nothing, that's why it is called the rat-specific agent. Red squill's methanolic extracts are used as hair tonics to relieve dandruff and seborrhea, this activity is done by scilliroside.

Traditionally it was a remedy that was used to take care of cancer, one of its ingredients called silliglaucosidin, has shown some activity in the cancer line.

Although white squill, when given in small doses has the capacity to generate cardio threats that can later cause death, but it has never occurred with the human race. Vomiting did occur, but only when it is consumed in excess. Its fresh bulbs do contain an agent that can cause blistering. We will see how it is used to cure many diseases:

It is basically an anti-oxidant and has the potential of doing an anti-oxidant activity because it has an abundance of vitamin C in it. Thus it saves the damage caused by free radicals activity in the body. It also creates anti-inflammatory effects. It has so many benefits on our physical well being that it can't be ignored but has to be cultivated finely.