What are the Health Benefits and Therapeutic Uses of Kantakari (Solanum xanthocarpum)? 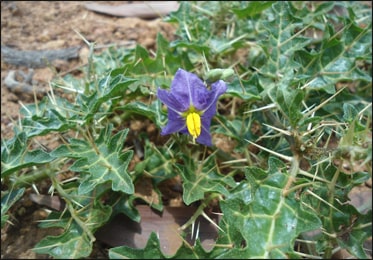 Kantakari is a very important medicinal plant used in Ayurveda. It comes under Laghu panchmoola. It is useful in treating cold, cough, asthma and other respiratory conditions. Its botanical name is Solanum xanthocaprum / Solanum surattense and it belongs to family Solanaceae.

Kantakari is a perennial herb with bluish-purple colored flowers. The root of this herb is cylindrical and is 10-45 cm long with small rootlets. The stem is green with young branches and is covered with numerous hair. Stems are 8 to 10mm thick of variable length. Their external surface is light green and when it is dry their surface is yellowish green. Leaves are elliptical in shape, with 4 to 12.5 cm length and 2 to 7.5 cm wide. Flowers are bright blue or bluish-purple in color, hairy and are 0.5 to 1.3 cm in length. Fruit is 0.8 to 1 cm in diameter and is globular in shape. The ripe fruit is yellowish in color with a white shade and unripe fruit is variegated with green and white colored strips. Seeds are flat and circular in shape with 0.2cm in diameter and are bitter in taste.

It is native to Haryana, Gujarat, Madhya Pradesh and Rajasthan, found commonly on roadsides and wastelands.

What are the Medicinal Properties of Kantakari?

What are the Medicinal Uses of Kantakari?

What are the Therapeutic Uses of Kantakari?

In cough, Kantakari acts as an antitussive that reduces the cough reflex and expectorant that helps to thin mucus and decreases its production. This herb clear the airways and maintains the proper functioning of the lungs.

In Asthma, This herb dilates the bronchioles and decreases the swelling and formation of mucus. It prevents sinusitis, common cold, and other upper respiratory allergies.

Kantakari acts as a diuretic that increases the amount of salt and water expelled from the body through urine. This herb lowers the blood pressure by flushing out salt from the body. It also acts as an antibiotic that stops the growth of bacteria. It also treats symptoms related to urinary tract infection such as burning micturition, excessive or no micturition, backache, vomiting, weakness etc.

Kantakari has a hepatoprotective activity and acts as an antioxidant that inhibits the oxidation process by preventing the damage of cells caused by free radicals. This herb also regenerates the new cells and maintains the proper functioning of the liver. It also increases the metabolism of the liver.

Kantakari acts as an antacid that neutralizes the acidic content and decreases its production. This herb provides quick relief in acid reflux (it is a condition in which acid content is pushed into the esophagus). It provides relief in symptoms related to acidity such as heartburn, constipation, pain in the abdomen, flatulence etc.

Kantakari acts as a pain killer that counteracts the pain. This herb also has an antibiotic property that kills the microbes and also acts as an antihistamine that reduces the allergic reaction. It also relieves pain and inflammation and reduces fever.

This herb acts as an antibiotic that reduces plaque and kills the bacteria that builds up the plaque because plaque produces toxins that irritate the gum. Sometimes the gums get inflamed resulting in puffiness and bleeding. This herb helps the gums to reattach to the teeth and makes them strong as well as healthy.

Different preparations made by Kantakari

Doses of these preparations