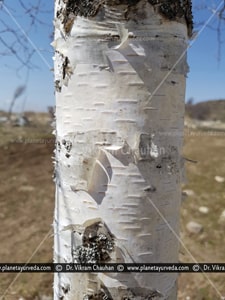 Bhoj Patra Tree is a tree widely found in the Himalayas, well-known for the use of its bark as written in ancient India textbooks. The tree is distinguished by its white to brownish bark. It is a middle sized tree, with very distinctive bark which peels off in very thin, almost transparent strips. Male flowers are born in catkins which hang in bunches at the end of bare branches, or with young leaves. Female flowers arise in solitary spikes. Leaves are 5-8 cm long, ovate, fine pointed, irregularly saw-toothed, finely hairy when young. Flowering: April-May.

The tree of Bhoj patra generally attains the height of sixty five feet.

There was a time when horoscopes were composed on some special types of leaves called as Bhoj patra or Bhurja patra. Till the invention of paper, bark of Bhoj patra was used for storing information in a written form. Owing to be used in place of paper, it is also called as Lekhya patra i.e. leaf for writing. 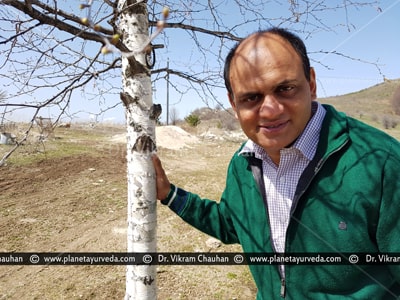 Available frequently in Himalayan range, Bhojpatra's bark is soft, shining and is like a paper. Its heartwood is of red and white color. Flowers make their appearance when the leaves start emerging from the tree. Flowers start appearing on in summer season which mature into fruits in autumn season.

It pacifies all the three dosha, if these are in imbalanced state.

Its bark is used as medicine in the form of powder or decoction.

In Charak Samhita, use of Bhoj patra is indicated as local application in skin diseases and its preparation in ear diseases. When there is pus in the ear, oozing out of the ear and deafness oil prepared from bhoj patra with some other herbs like Vidanga, Nagarmotha etc. is indicated to be used in it.

Bhoj patra is useful in epilepsy, insanity, hysteria and convulsions.

This herb also lowers the effects of poisons and also checks obesity.

Bhoj patra checks bleeding from nose and is useful in diarrhea and dysentery.

Bhoj patra is also called Bhurj patra, Bhurj, Charmi and Bahuvalkal. Its bark is in layers it is smooth, shining and white. Bhoj patra is useful in epilepsy, insanity, hysteria and convulsions.

It is useful for kapha diseases, ear diseases, pitta and raktaj diseases and various psychological disorders.

Bhoj patra is astringent in taste it lowers effects of poisons and also checks obesity.

According to recent clinical studies carried out in the US, the bark of the Himalaya Silver Birch which contains Betulinic acid is extremely effective in treating Melanoma which is a kind of skin cancer.

The bark of the tree is also useful for treating kidney and bladder disorders.

The Himalayan Silver Birch contains anti-inflammatory properties which reduces the pain and inflammation caused due to rheumatism and gout.

The bark containing botulin is known to have anti-fertility activity.

The papery layer of Birch bark is considered to be highly astringent agent. By virtue of such quality its external use is recommended as styptic (to stop bleeding) and to stop any purulent discharge. Hence it is used more often to clean the wounds.

Ayurveda also uses Birch in many formulations for obesity and other disorders of lipid metabolism. It has been described to be effective herb for treatment of obesity.

Bark of bhoj patra is used as a covering, protecting from the evil effects of devils etc. Sages have been using its bark as a part of their lower garment. People going to Badrinath, Kedarnath, and Gangotri tie its bark under their foot thus making their journey comfortable. Bhoj patra has been considered all auspicious due to its occurrence in that divine region. Its presence is auspicious as no evil soul dare to play havoc where there is presence of bhoj patra bark. 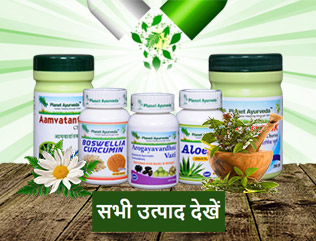