What are the Health Benefits and Uses of Mucuna Pruriens (Velvet bean)? 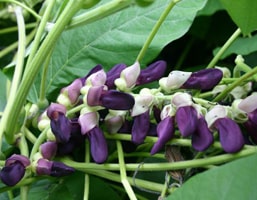 What is Mucuna Pruriens?

Mucuna pruriens grows all over India, specifically in tropical regions and also grows in tropical areas of Caribbean and Africa. It has velvet coating of hair which covers it and can cause irritation and itching on the skin if touched. Hence, also known as Velvet bean. Since ages, it is being used in Ayurveda for various diseases, particularly for Parkinson's disease. It is a like a plant that stimulates blood flow.

What are the Common Names Used for Mucuna Pruriens?

How Mucuna Pruriens is Scientifically Classified?

Plant of Mucuna pruriens is a climbing shrub that grows up to 15 meters in length. It is almost covered with hair in young age but with time as it matures all the hair goes away. Leaves of this plant are ovate, tripinnate or rhombus shaped. Heavily grooved sides of its leaves have pointed tips. Leaflets have stems which are 2-3mm long and adjacent leaves are also present. Flowers heads have many flowers and have axillary arrayed panicles. Its shuttle and samples are of the same size. Fruit have lengthwise ridges. The husk of the plant has seven seeds and is hairy.

What is Mucuna Pruriens Effect on Tridosha?

According to Ayurveda, all the diseases are caused due to an imbalance of tri-dosha. This plant, i.e. Mucuna pruriens balances Vata and Pitta Dosha. It promotes body weight, muscle mass and can increase Kapha.

Which Part of the Mucuna Pruriens Plant Used for the Medicinal Purpose?

What are Medicinal Uses of Mucuna Pruriens?

What can be the Side-Effects of Mucuna Pruriens?

What Pecautions Should be taken While Using Mucuna Pruriens?