Lecture on National Ayurveda Day 2016 in an Event - Declamation Contest

Dr. Vikram Chauhan encouraged the students to keep basic principles of Ayurveda in Mind and there is huge scope of ayurveda in today's world. The world and the modern medical science has not done enough research on topics of Ayurveda. We already have abundant data in our ancient books. We just need to do the search and even the search in ancient books can help many patients around the world.

Dr. Vikram Chauhan also gave medals and trophies to participating students in the declamation contest held during the event. 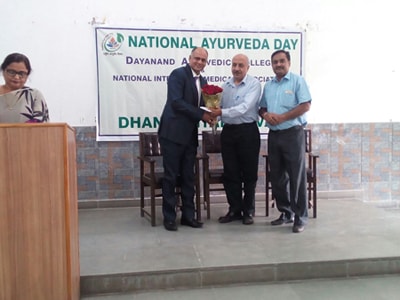 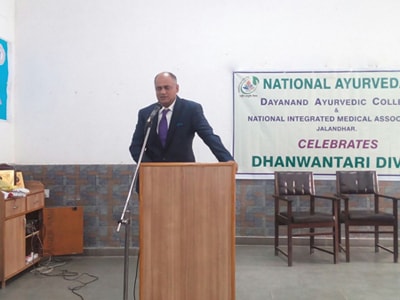 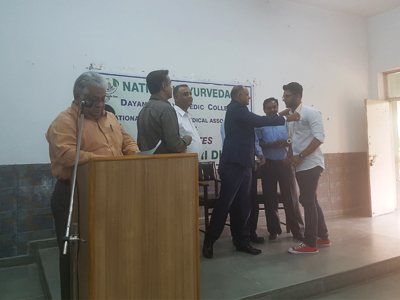 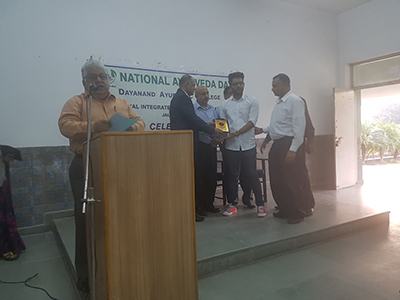 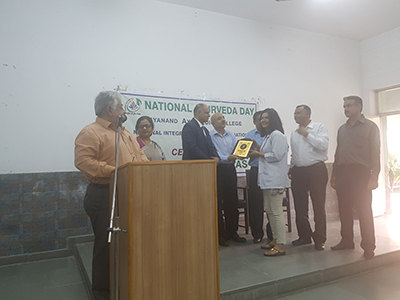 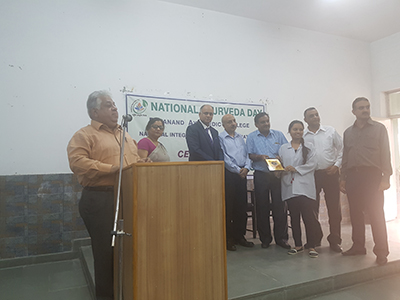 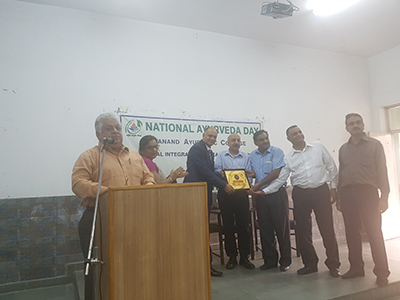 Respected Principal Sir, honorable NIMA president Dr. Anil, my fellow NIMA members, respected teachers and my dear students. I congratulate you all on account of Dhanvantri Divas. Tomorrow is Dhanvantri Divas and I'm really glad that I've been so respectfully invited to my college. And I've been given a chance to share my experience with Ayurveda with you all. Our Dayanand Ayurvedic College is very talented. I'm getting really happy, I'm recalling my time when we would also sit and enjoy and I'm really glad to be with you all today. Ayurveda and herbal medicines have a lot of scope nowadays. In Punjabi, when a foreigner comes they say that there is such chaos (Karbal) in the entire village and today there is herbal everywhere. There is so much scope, either go to USA or Europe everybody is talking about herbal medicines and Ayurveda. The Prime Minister, Mr. Narendra Modi's announcement that Dhanvantri Divas will be known as World Ayurveda Day is a proud moment for us. Though, we are lacking behind by 67 years but we're on the right track now and we have Ayurveda as a huge support behind us. We have such a humongous treasure depending on which we can do anything. And as you told, India is rich in culture, traditions and knowledge. Whatever I'm doing in Ayurveda, how am I able to do it? Firstly, with whatever knowledge our teachers gave us and during that time we had interest and we used to study also. Always remember the basic principles of Ayurveda, they are very useful and this is your time to study after that you won't get time when you get busy with your professional lives.

This topic is popularly spoken about, the purpose of Ayurveda,

When we start practicing and get busy, we tend to forget it, but it should be kept in mind and how it can be achieved. First understand the basic principles of Ayurveda. Our body is made up of soil and it will dust off. According to Ayurveda, we're related to God's creation. Just like som holds (dash) similarly, tridoshas hold our body. I said they hold not corrupt. But tridoshas hold our body and they're capable of corrupting it as well. They corrupt it when they're imbalanced, not in their normal state. How are they imbalanced? What is a disease? It is mentioned in the books. If you remember just 5 – 6 basic principles, you can practice pretty well in Ayurveda. These 5-6 logics are very easy and help you start a nice practice, you can even develop herbal formulations. You can do everything related to Ayurveda with it. How can we balance the doshas? First you should know how the doshas are vitiated, there are three main reasons Asatmyaindriyarthsamyog, Pragyaapradh and Kaal prinaam. An example of Asatmyaindriyarthsamyog is when you're going in a forest and a lion comes in front of you and you get petrified. As soon as you get the feeling of scared, all the hormones get fluctuated you get adrenaline rush which is necessary because you have fight with the lion. But nowadays, we are always in the state of being scared there is exam stress, financial stress, job stress. There is some sort of fear all the time, future planning being a part of it. That causes the cortisol and adrenaline to be on the higher side all the time. People are affected by diabetes and blood pressure and that is what is known as the imbalance of doshas. Indris have further categories Kaam krodh lobh moh bhay ahankar. Out of them I've explained bhay (fear), how it causes diseases. If we talk about Pragyaapradh, it means a sin done intentionally and it is a big reason of causing Dosha imbalance. You're all well-read doctors rather you're going to become really intelligent doctors. But when someone brings a box of sweets to your home and you're suffering from diabetes but your mouth still starts watering, your wife might stop you by saying that you're sugar level will rise but you still think I'll eat one and take the medicines prescribed by the doctor and it will be under control, this is pragyaapradh. Everyone knows that you should go for a walk in the morning but we don't feel like getting up in the morning. No one goes out to exercise, its cold outside, weather is changing. We avoid it and pull the covers and sleep. This intentionally done act is known as pragyaapradh that gives rise to imbalanced doshas. Now how to balance it? These 3-4 formulas I've told you will help in treating patients. A Sardar ji (Sikh) patient came to me and said that Dr I'm suffering from acidity, he said he gulps down a few drinks in the evening to which I said leave the drinks and start taking coconut water in the morning and gave him a few herbal formulations like Amla (Indian gooseberry), Yashtimadhu (Licorice), Shankhpushpi, Mukta pishti, zehermohra pishti. He came back after 15 days and told me that you've done wonders, my acidity is 50% better. I asked him what he did, he said earlier I added soda to my drinks [Alcohol], now I take them with coconut water. I asked him to just take coconut water and leave the alcohol. This is just an example of how it calms the pitta.

It means you can calm the vitiated dosha with herbs of opposite qualities. There are very simple formulas in Ayurveda with which we can cure destructive diseases like IBD i.e. ulcerative colitis which have no cure in the world. Lajwanti (Mimosa pudica), Darbha grass (Desmotachya bipinnata), Genda (Marigold flower), we used to study in Dravya Guna, that the herbs which are useful to stop bleeding like Arjun, Vasa. Only with the help of these herbs intestinal disorders can be cured. Kutaj is used to control diarrhea/dysentery and its name is Holarrhena antidysenterica. Its botanical name is Holarrhena antidysenterica that means science also knows it works on this, in Ayurveda it has been written since very long. With these simple formulas we can cure these grievous diseases. There is a very simple formula सर्वदा सर्वभावानां सामान्य वृद्धिकारणं ह्रास हेतु विशेषज्ञय ॥