Raktamokshana therapy is the blood cleansing and purification therapy. It is a therapeutic cleaning process given by Ayurveda. It is one of the essential parts of the Panchkarma healing treatments. Raktamokshana is the prime process of blood detoxification. Ancient Acharya Sushrutha explained Raktmokshana among Panchkarma. It is derived from the two words, "Rakt", which means blood and "Mokshana", which means leave. Thus, Rakt mokshana means to let the blood out. The blood is expelled out from the body to reduce the quantity of toxic substances in the blood borne disorders. However, this therapy is not generally recommended to the patients. This is because; it involves a certain amount of risk factors in the whole cleansing and detoxification processes. 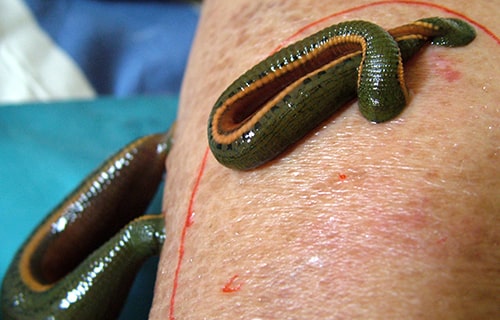 Raktamokshana is generally of the following two types:

1. Shastra Visravana (Use of sharp instruments for Raktamokshana)

Generally metallic instruments are used to carry out this process. It is further classified into two more categories:

The metallic instruments are considered for carrying out this procedure. It is further classified into three categories:

Of all the various classified types, Venepuncture of Siravyadha plays the most popular role in carrying out Raktamokshana effectively.

Complications to be Treated with Raktamokshana Therapy

Individuals with aggravated unbalance between the blood (rakt) and Pitta dosha (fire body tumor) and high level of toxicity are recommended as the Raktmokshana therapy. The important complications to be treated with the therapeutic therapy are skin disorders like allergic dermatitis, eczema, sciatica. Some other disorders, which must be treated with Raktmokshana therapy include abscess, edema, swelling and inflammations, uremia, dullness, pericarditis, tonsillitis. Also, this procedure helps in proper functioning of liver, heart and other essential organs of the body.

Procedure of Carrying out Raktamokshana

It is carried out in regular periods. It is mainly done for diseases like gout, filariasis, psoriasis, glaucoma, oedema, erysipelas, liver and spleen disorders. Cotton swabs, gauze pieces are some of the proper instruments used to carry out this procedure.

The various aspects to be considered during Pradhana Karma are the following:

After the pradhana karma is done, dressing is done with a massage gently surrounding the wound. This is done with the help of the medicated oil.

Raktamokshana works as a preventive therapy and curative therapy as well. This therapy in Ayurveda is a partial or a complete treatment depending on the situation.