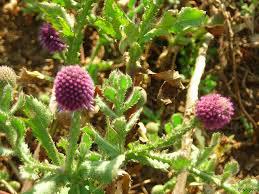 Sphaeranthus indicus is commonly known as khmundi, Indian Sphaeranthus and East Indian globe thistle. It belongs to the family of Asteraceae.

The Sphaeranthus indicus is found throughout the India, Nepal, Sri-Lanka, Malaysia, Australia and Myanmar.

Sphaeranthus indicus Plant is much branched and strongly scented. The stems are cylindrical in shape with toothed wings. Leaves on the other hand, are sessile, 2-7 cm in length and about 1.5 cm in width. They are greenish brown in color. The flowers of this plant are borne in terminal with purple colored heads. In each head, the outer flowers are females, many of them are fertile. The central flowers are bisexual and fertile. Purple colored corolla of female flowers are slender and tubular in structure, while corolla of hermaphrodite flowers are of purplish white color, and are of funnel shaped.

The stems of this plant shows cork that bears two to three layers of parenchymatous cells. These cells are covered with papillose cuticle having trichomes. The roots of this plant show a typical brown colored tissue, metaderm, on its outer side. It contains suberized cells, which are arranged irregularly to form a protective layer.

The fruits of this plant have compressed achenes in which pappus is not present. This plant is of slightly aromatic odor, but, this odor disappears on long storage of this plant.

Ayurveda is one of an oldest system of medicine that helps us to maintain a healthy body by managing the three basic energies of our body in a natural way. These basic energies are known as the doshas, in Ayurveda. In Ayurveda, the energetics of Sphaeranthus indicus are listed below:

The Planet Ayurveda's Gorakhmundi powder contains the powder of flowers of Sphaeranthus indicus in it. This product supports healthy uric acid.