Trayostambh refers to three pillars. Ahara (Diet), Nidra (Proper sleep) and Brahmacharya (Abstinence) are described as Trayostambh in Ayurveda. In fact, they are pillars of the human life and are basis of heath life. Just as three biological humours, vata, pitta and kapha and triguna, sattva, rajas and tamas, regulate the body and mind, respectively, ahara, sleep and brahmacharya are essential for promoting healthy life.

Ahara stands for balanced diet and is the first and foremost pillar of Ayurveda. What does a balanced diet mean? Balanced diet is one which supplies the humans with required amount of carbohydrate, proteins, fats and vitamins. Ahara is fundamentally preventive in nature.

Ayurveda commonly is known as "Science of Life" and knowledge of proper diet is integral part of Ayurvedic dietetics. Ayurveda provides the first approach that can be helpful in creation and maintenance of perfect health and to alleviate the symptoms of illness. From treatment point of view, Ayurveda recommends that while diet is not capable of curing all the diseases, but majority of the diseases can be put under control only by doing adjustment in diet and maintain proper eating habits. 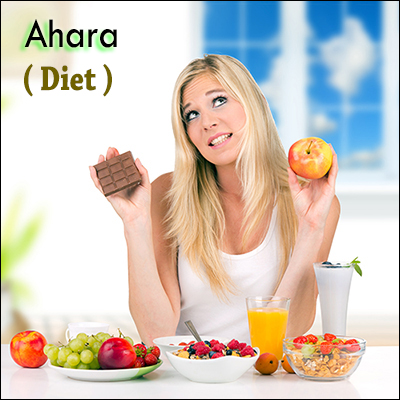 Among three trayostambh, ahara is must factor for maintenance of healthy life. Life supported by three pillars, is empowered with strength, complexion and growth and full span of life. Charaka mentions ahara to the ultimate sustainer of life.

Ayurveda gives due importance to prakriti (body constitution) as far as consideration of food intake is concerned. The three biological humours, Vata, Pitta and Kapha constitute seven types of prakriti. In this universe, each and every person is a unique because of heredity, environment, biochemical structure and mental status. For this apparent reason, all the individuals cannot use effectiveness of all the natural and good food items to the same extent. Every individual should consume a diet versed to his/ her predominant biological humours, to keep them in state of equilibrium in different seasons.

Concept of Ayurvedic dietetics is unique in sense of its individualized approach.

Rules in Relation to the Intake of Ahara

Charaka Samhita has given 12 rules which should be followed to get maximum effect of food item, consumed:

According to Ayurvedic theory, the state when the mind and body undergo rest, it is known as living body is asleep. When the mind is affected by tamoguna in the night, the kapha dosha predominates and natural sleep is induced. Kapha, humour is related to growth and development of body tissues and enhances the immunity to against diseases.

In the presence of depression, anxiety, anger or sham rage, calm sleep is not possible because these increase Vata, which has opposite effect as compared to tamoguna. Sleeping for long times or sleeping late in morning imbalances the daily routine and has a bad impact on health. Insomnia (lack of proper sleep) induces lethargy, burning sensation in eyes in eyes, headache, and body ache. Poor sleep affects the routine in bad manner, as it has impact timely on regular bowel movements. 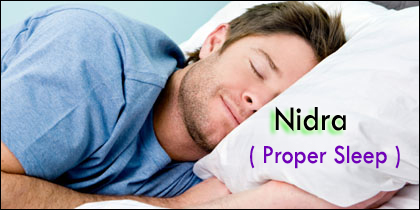 According to Ayurveda, seminal fluid is the last Dhatu that is formed out of Majja or marrow. Ayurveda suggest protecting semen in order to enhance health. That man who uses his physical body only but keeps the intellect and heart undeveloped cannot expect to attain perfect Brahmacharya.