The disease has been troubling mankind since the 16th century. The bacteria named Bordetella pertussis was first discovered in 1906. It was in 1942 that the first combination vaccine DPT for Diphtheria, Pertussis and Tetanus was first developed and has since been used successfully to save many lives.

It is a highly contagious infectious disease. Caused by a deadly bacteria named Bordetella pertusiss. It is also known as "100 day cough". Very common in children under five years of age, pertussis is one of the most difficult diseases to cure, especially in children. With the development of a specific vaccine for this disease example, DPT, pertussis can be easily controlled. DPT vaccine for diphtheria, pertussis and tetanus has been very successful with the children and has drastically brought down infant mortality rate.

Despite the rapid advancement in sciences, whooping cough, a deadly bacterial infection, still manages to cause significant mortality among the people of the developing world.

Every year, millions of people particularly in the developing countries suffer from this disease. In infants, less than a year old, whooping cough accounts for approximately 2 % of deaths in that age group.

What is whooping Cough?

Pertussis also known as "whooping cough" or 100 - day cough is a contagious bacterial infection of the respiratory system. The bacteria are air borne and transmitted by the droplets of saliva present in air due to sneezing and coughing of other infected people.

The coughing may last for up to ten weeks or 100 days in which the patient suffers from marked coughing and feeling of vomiting which may be accompanied by extreme fatigue and malaise.

The coughing is so severe in children that they may end up breaking a rib or two. In infants, the coughing is not very severe and they usually have recurrent bouts of not breathing at all in between phases of normal breathing.

Common Symptoms of the Disease

Vaccination for the Prevention of Pertussis

The most effective and primary method of prevention for pertussis is vaccination.

Pertussis vaccine has been highly successful after recommendations by World Health Organization and The center for disease control and prevention.

The vaccine is up to 85 % effective and though it has not been able to eliminate the disease completely, the multicomponent a cellular vaccine has made deadly whooping cough as one of the most common vaccine preventable disease in the western world.

Infection from Bordetella bacteria does occur in many cases even after immunization, but the symptoms are usually mild.

Mortality rate is particularly high in children and infants less than 1 year of age. It is almost fatal in this age group. For older, otherwise healthy children and adults, Pertussis is easily cured and patients usually recover fully with proper treatment.

Planet Ayurveda offers best combination of effective herbal remedies such as Eosinophilia Care Pack for ayurvedic treatment of whooping cough. We provides 100 percent pure and natural products. All of them are free from side effects and are safe to use. And they are formulated by MD Ayurveda doctors. All of the medicines from the house are made without the addition of chemicals or additives or preservatives in it. 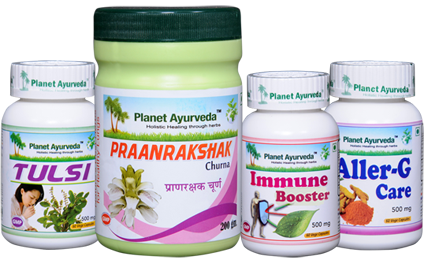 Praanrakshak Churna is a herbal powdered formulation, which is effective in various allergic conditions. This formulation contains Shirish, Bharangi, Kantkari, Anantmool and Madhuyashti. These herbs act in a synergistic way and are very effective in chronic allergies, upper respiratory tract infections, respiratory tract infections, chronic bronchitis and asthma. Bharangi, Kantkari and Shirish are the herbs, which act as natural antihistaminics and are beneficial in acute and chronic asthma. Vasa and Madhuyashti breaks the mucous plug and are useful in cough, bleeding while coughing and repairs the respiratory tract. Anatamool or Typlophora asthmatica as the name signifies is another herb beneficial in asthma.