What are the Uses and Health Benefits of American Witch Hazel (Hamamelis Virginiana)? 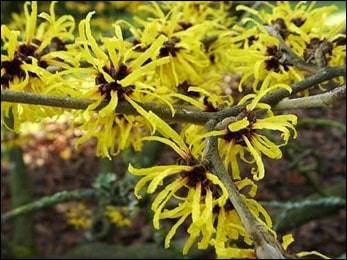 American witch hazel is a deciduous small tree or shrub. It posses very interesting qualities and uses. The name Witch hazel comes from an Anglo-saxon word which means bend. Earlier it was known as American wicke hazel where ‘Wicke’ means lively but due to its bend and forked branch, its name was changed. It is usually planted for home landscaping on the north-facing slopes or north side of homes. This plant grows well in semi-shaded locations. American witch hazel can be grown by seeds which take 2-3 years to get mature. The flowering of this plant does not start until this shrub is 6 years old.

What are the other common names used for American Witch Hazel?

What is the Botanical name of American Witch Hazel?

General Description of the Plant

American witch hazel grows up to 6m tall rarely can grow up to 12 m tall. Its branches are multi-stemmed and grow densely up to a height of 20-30 feet. Leaves of the American witch hazel are simple, broad, ovate and alternate. Size of leaves varies from 2.5 inches to 6inches long. Its base is unequal and has large wavy teeth on the margins. The upper surface of leaves is dark green and the lower surface is pale green. The bark is smooth, scaly and dark brown or inner reddish-purple in color. Its flowers are different than ordinary which are bright yellow in color is. It has four creamy colored slender petals. This woody plant flowers between mid-fall to late falls. Calyx of the flower is four-parted and orange-brown in color from within and do not have any kind of fragrance. Its fruit is a hardwood like a capsule. It splits when matured one year after pollination, ejecting the black seeds. It is pollinated by the month.

It is native to North America, from south to central Florida to eastern Texas, and from Nova Scotia west to Minnesota.

Which parts of the American Witch Hazel is used for the Medicinal Purpose?

Dried leaves and bark is used for medicinal purposes.

What are the Medicinal uses of American Witch Hazel?

What can be the side-effects of American Witch Hazel?